Note from the Founder

In the 2016 presidential election, 94 percent of African-American women voted for Hillary Clinton to become the first woman President of the United States. In 2008, 68.8 percent of black women went to the polls to elect Barack Obama as the first black President. According to the Pew Research Center, black women had the highest voter turnout rate for the first time among all racial, ethnic and gender groups.

Yet, our voter loyalty and prowess is not translating into advancements for black women. We still make 64 cents to every dollar a white man earns. Twice as many black women have no health insurance compared to white women. Black women live five years less than their white counterparts. We make up 53 percent of the black workforce, but are more likely to work in low wage jobs with no benefits and little possibility for advancement. According to a recent study by the Insight Center for Community Economic Development, single white women in their prime working years—ages 36 to 49—have a median wealth of $42,600 while for black women it is only $5.28. Low earnings also affect Social Security benefits, which is the only source of retirement income for more than 25 percent of black women.

Nothing is going to change for black people until black women demand their worth and elect into office people who share our values. Ida B. Wells-Barnett, a former slave, knew her value, which is why I formed a political action committee in her name.  Today, we must not only know ours but demonstrate it by everything we do – whether at the polls, whom we fund or by actively supporting concrete efforts to promote our value.

Founding an organization in Ida’s name seemed my destiny.  Beyond admiration for her personally, I share a similar background in journalism, consulting progressive political candidates and officials, policy development and understanding the role media can play in our advancement.  I grew up and live on a block in Chicago’s Bronzeville where Wells-Barnett and her husband, Ferdinand, lived and other Who’s Who of historical black figures. In addition, the Ida B. Wells Homes, which the public housing authority constructed in 1939, stood on the corner of 37th and Martin Luther King Dr. until demolition began in 2002 as part of Chicago’s Plan for Transformation.

I am blessed at this early stage with a seasoned, diverse advisory committee equally dedicated to carrying out Ida’s Legacy.  Others have welcomed our first events, many expressing pride, hunger and hope for our ambitious goals.  We look forward to counting you among those who will continue Ida’s activism and carry on her legacy. 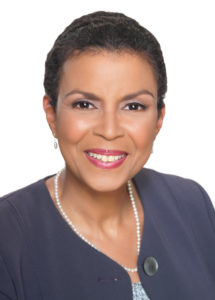 She launched her media duties for political campaigns in 1988 as national traveling press secretary to presidential candidate Jesse Jackson. In 1996, she became the first African-American press secretary to the Democratic National Convention.  She later signed on with presidential candidates Bill Bradley, as Illinois state director, and Hillary Clinton, as a surrogate speaker in 2008 and Illinois press secretary in 2016.   Her consulting firm has also advised several  Chicago and statewide campaigns political campaigns.

Delmarie has established a reputation for her unwavering commitment to progressive public policies and causes, such as protecting public education, curbing the spread of gambling,  pursuing accountability for gun violence and police misconduct.  She has long promoted  the South Suburban Airport as an economic engine for neglected Illinois communities, developing it as the major plank of Jesse Jackson Jr.’s campaign  platform in the 1995 special election.

The media frequently seek her expert viewpoints on politics and political campaigns.  She is a recurring guest over the years on “Chicago Tonight,” “848,” and “Beyond The Beltway,”  as well as interviews by  national and international reporters for a variety of media.

Delmarie has earned numerous honors, among them from  N’Digo, National Association of Black Journalists-Chicago Chapter, Today’s Black Woman, Rainbow/PUSH, and Top Ladies of Distinction.    She values most helping to nurture and develop the journalism careers of many young adults who have interned in her office or sought her counsel.  Like her hero, Ida B.  Wells, she has sought to create a legacy of forging a path for others.

For more, view Cobb at NewFounders Conference, in AWBC Magazine, and see Archives